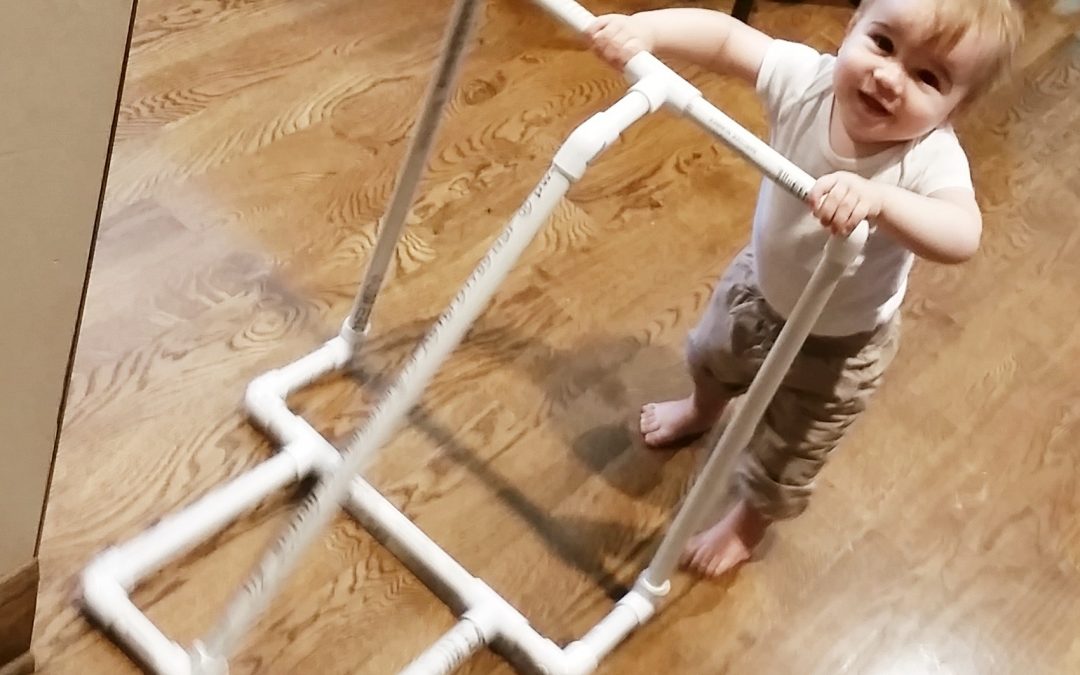 This summer, Gabriel turned two years old! I’m certain he was somehow clued into the guidelines and expectations of what comes with that number as he almost immediately began saying “No!” and “Miey!” (mine) with the gusto, ownership and dedication of a Vaudevillian. For any other parent of any other child, this milestone would be equally cute and frustrating as the door to the Terrible Twos blasts open. For this parent, the sound of that door is coupled with a giant sigh of relief and pangs of hope in my heart.

When we took Gabriel to Duke University to see all of the experts in Pompe Disease, we were stunned and stutter stepped upon learning he was “Severely Delayed” physically.
My cousin is an Occupational Therapist in Columbia, Missouri and told us about a program that could help Gabriel. We immediately called Missouri First Steps and got the ball rolling on making our six-month-old as strong as he could physically be.

Missouri First Steps is a program, provided by the state and adjusted to each family’s income, that provides therapeutic help for babies up to three years old who have disabilities or developmental delays. Therapists come to your home to provide the help your little one needs.

After a few meetings and some paper work, we were set! I had hope, but never imagined how life changing this program and the people who work in it would be for our family.
Gabriel was paired up with an Occupational Therapist, Miss Nicole, and the work began immediately. His first session was, perhaps, harder for me than it was for him. Here we were, a stranger in our living room, playing with him in ways to work muscles he hadn’t really worked before her visit. He cried out loud. I cried inside. I wondered if we were doing the right thing. My heart wondered. My head knew we were. 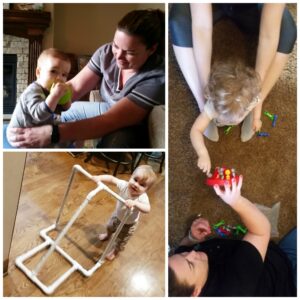 In March, when Gabriel was 22 months old, we learned that he wasn’t just a quiet guy, but a guy who likely had trouble talking. A speech delay. Here we go again. We learned that that issue was probably connected to not having as much use of his tummy muscle as we’d like him to have.

We immediately saw a Physical Therapist who specializes in eating and called our First Steps team. Within two weeks, Gabriel was assigned a speech therapist.
Fast forward (and it has been fast) to today: Miss Nicole is one of Gabriel’s favorite people on this planet. When I tell him she’s coming, he runs to the front door to see if she’s there. He loves it when Miss Caitlyn (his Physical Therapist) visits and thinks Mr. Denny (his speech therapist) is a real cool guy who may have hung the “MOO-N!”

Since we have shared our family’s journey with Pompe Disease, we’ve been blessed to have met so many people with similar stories of rare diseases. Last week, a young and new mom reached out to me. Her daughter was born in March and through the Newborn Screening they learned she also has Late Onset Pompe Disease, like Gabriel. In her voice, over the phone, I heard an echo of my own frail voice and strong fears from two years ago. I will never forget what it felt like to go through weeks of testing only to learn it is, what we considered at the time, the Worst Case Scenario. I asked Megan if she’d heard of Missouri First Steps and she hadn’t. It only occurred to me then that we wouldn’t know about this program, had it not been for my cousin. So, here I sit writing this so that anyone else who needs this program knows about it.

I don’t know what other states provide but hope any parents who live outside of Missouri reading this will ask their pediatricians.

In this post, I used a word I banned from my lips and fingertips two years ago: Milestone. I would get emails from groups I’d signed up for that had my baby’s birth date. I seemed inundated with emails titled: “Your baby at 4 weeks!” “Your baby at 6 months!” “Your Toddler at ….” Offended with each one that seemed to be telling me what my baby should be doing but wasn’t, I stopped reading them and trashed every email without reading beyond the accusatory titles at some point. Today, I’ve reached several milestones. I know there is no “normal” when it comes to a child’s development (or otherwise!) I know Gabriel’s milestones are his and each should be – and are – celebrated. And, I know that without the help of our First Steps family, I wouldn’t have reached those milestones. Step by step, Gabriel is stronger because of them.

If you live in Missouri, here is the link to an awesome resource for you: https://www.mofirststeps.com/