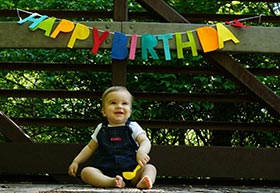 I’ve learned many things as a mom of 3 in 4 years’ time: You can never have too much milk, too much toilet paper or too much faith.

The latter has been tested for us this year.

Gabriel is one year old now. What a year it’s been. We’re grateful he is a sweet, healthy, handsome and healthy boy right now.

Days after our son was born, we got a call from our pediatrician’s nurse. He needed to get more blood work to confirm a positive on his newborn screen was probably wrong. She told me the test was likely affected by the July heat.

Retaking that test was just the beginning of such a hard, humbling and beautiful time for our family.

Two weeks later, another call. This time it was the pediatrician. I held my baby in one hand and wrote down words I was hearing for the first time with the other. Lysosomal. Storage. Disorder. He told me Children’s Mercy was putting a special team together for Gabriel. After that, I just heard beats of words, but kept writing: Clinic. EKG. Blood Test. Cardiologist. Tomorrow. Special. Children’s Mercy. Geneticist. She’s waiting for your call. Enzymes. Probably nothing. Just in case. Pompe.
My husband had been out picking up the “big” kids. When they pulled in the drive, they were laughing and singing. My heart was weighing me down knowing I was about to give him news possibly too heavy to hold.

The next weeks – months – were spent waiting, hoping and ruling. We waited for calls, hoped they brought good news and that we could rule out the worst scenario. I so badly wanted to throw my scribbles into the trash and forget the multisyllabic words I hadn’t known before those calls. That was not to be.

There is never a “right” moment to get the “wrong” call. I will keep the details of that day private but share that my husband was the one who got it then circled around the block trying to figure out how to now hand me something possibly too heavy to hold let alone lift. We were out of words and, by the end of that night, tears.

Our baby doesn’t have enough of a lysosomal enzyme that breaks down glycogen into glucose in his body. Over time, people with Pompe can and/or will be overcome as the glycogen builds up and compromises their muscles. Without treatment, those muscles no longer work and people with Pompe lose function of their vital organs.

Gabriel has a form called Late Onset Pompe Disease, or LOPD. The word “late” can be deceptive as he could develop signs of Pompe at any time: seven years, seventeen, seventy or never.

In 2006 the FDA approved Enzyme Replacement Therapy, or ERT. This breakthrough is the result of one father’s tremendous will to not give up on his two children who were diagnosed with a more progressive and – at that time – deadly form of Pompe. John Crowley (featured in the 2010 movie “Extraordinary Measures”) pushed hard and was able to get funding for the wonderful team at Duke University to push hard and come up with ERT. There is no cure for Pompe. We are all born with the number of enzymes with which we will die. You can’t build more. But, ERT allows our Pompe kids (and adults) to live better and longer. It is an infusion that patients get every week or every other week to replace what they are missing. As with any medication, there can be complications. And, the infusions are an all day process that cost $300,000 or more a year. It is a lifesaver but far from ideal right now.

We took Gabriel to Duke in January, when he was six months old. The people there might as well not wear lab coats as I’m sure they smash down their angel wings. They are incredible and are working with Gabriel’s team here at Children’s Mercy. They, too, are amazing.

Gabriel is not getting Enzyme Replacement Therapy as he isn’t a candidate for it yet. He has his blood and urine tested every three months and physical therapy each week. Each of his milestones have such an impact on us. We’ve gushed and cried seeing him roll over, sit and crawl on his own and in his own timeframe. There are some physical signs only visible to the trained eye. Those concern us as they are markers of people with Pompe. It’s hard to see them but at the same time hard to be sad because he is an amazing and healthy baby boy.

Our doctor at Children’s Mercy told us not to treat Gabriel any differently than we would without this diagnosis. He said he could be the next starting pitcher for the Royals (which we fully expect to happen!) One day, after sharing Gabriel’s diagnosis with a dear friend, I opened the mail and found a bright blue baseball mitt. It is on a shelf in his room. It’s a reminder: All things are possible.

We know that we are both in a fight against time while at the same time graced by having time on our side. Our mission is to find a way to help make Enzyme Replacement Therapy more convenient and accessible. We imagine it being given to people like insulin is given in a pump now to diabetics.
We are incredibly blessed to live in Missouri. It was the first to implement Pompe into newborn screens. A few other states have followed. But, we want to see all fifty do this. If we can stay ahead of the progression of this disease, we are all the better for it. Sadly, so many people diagnosed with LOPD found out after years of not knowing what was wrong with them. They wasted time – years – testing for a myriad of diseases. In that time, their muscles were compromised. There is no coming back from that.

What we know now:

You really never do know what other people are going through. Grace and kindness are a currency well spent yet sometimes undervalued.

Medical issues create emotional and financial burdens no one can know unless they have been close to or through the fires they create.

Miracles are everywhere. I’m heading to the splash park this morning with one who is already 12 months old.

Finally, we also know this:

No milk? Water will get us through. No toilet paper? Tissues can do. Faith? The well is deeper than we could’ve imagined.

Thank you for reading this and for caring.